PHOTO: Australian Banks are in the business of making money for themselves. FILE

RBA analysis has shown that certain mortgage payers could see their repayments increase by a whopping 60 per cent.

Back in October last year, I explored the possibility that the Reserve Bank of Australia (RBA) could be forced to raise interest rates in order to chase rising inflation.

Comparing them with the old Looney Tunes character Wile E. Coyote, I speculated that the RBA could be forced to furiously chase inflation in the same way that Wile E. chased the Road Runner.

Now as outsized rate rises of 0.5 per cent appear set to become commonplace and the forecasts of the peak in the RBA’s cash rate continue to be revised higher, it appears to be following Wile E. Coyote’s example, swiftly chasing after its goal of contained inflation after it fell too far behind.

On Tuesday, ANZ revised its cash rate target for the end of this year to 3.35 per cent, now the highest of the big four banks. In order to get to this level, the bank predicts that the RBA will raise rates by 0.5 per cent in August, September, October and November.

While this may be seen by some as excessive, when put into the context of the current headline strength of the Australian economy and interest rates in key Western nations rising even faster, it’s easy to see how things could potentially play out in this manner. Last week the Bank of Canada surprised the world by raising interest rates by a full 1 per cent in a single rate meeting. Meanwhile in the US, the Federal Reserve is widely tipped to raise rates by 0.75 per cent next week and continue to aggressively raise rates in the coming months.

The official mandate of the RBA is “to contribute to the stability of the currency, full employment, and the economic prosperity and welfare of the Australian people”.

While this may be a bit of a mouthful, it is often boiled down to two things – inflation being in the target band of 2 to 3 per cent and the pursuit of low unemployment.

On the first count, the RBA has failed rather badly. If the forecasts by Treasury and the RBA themselves of inflation hitting 7 per cent or more are correct, this would mark the highest level of Australian inflation since the RBA defined its inflation target almost 30 years ago.

On the other hand, the nation’s unemployment rate currently sits at just 3.5 per cent, its lowest level since comparable records began almost 50 years ago. But attributing this to the RBA and monetary policy would be stretching it quite a bit.

According to an analysis by IFM Investors economist Alex Joiner, if the working age population continued to grow at the same rate it was prior to the pandemic, the unemployment rate would be around 5.5 per cent, which is higher than when the pandemic started.

Looking at a simplified view of the RBA’s mandate, it is clear what comes next: Interest rate hikes and lots of them. With inflation set to rocket even higher and the rising risk that it could become entrenched within the domestic economy, the RBA is set on aggressively raising rates in its attempt to contain inflation before its too late.

This is where things start to get challenging for some mortgage holders.

With Australian inflation still seemingly nowhere near its expected peak and the labour market extremely strong, rates could continue to rise for the foreseeable future and remain significantly higher than prior to the pandemic for potentially years to come.

According to a recent analysis by the RBA, around 30 per cent of variable rate mortgage holders face a more than 40 per cent increase in mortgage repayments in the event of the cash rate hitting 3.1 per cent. (It’s currently sitting at 1.35 per cent.) 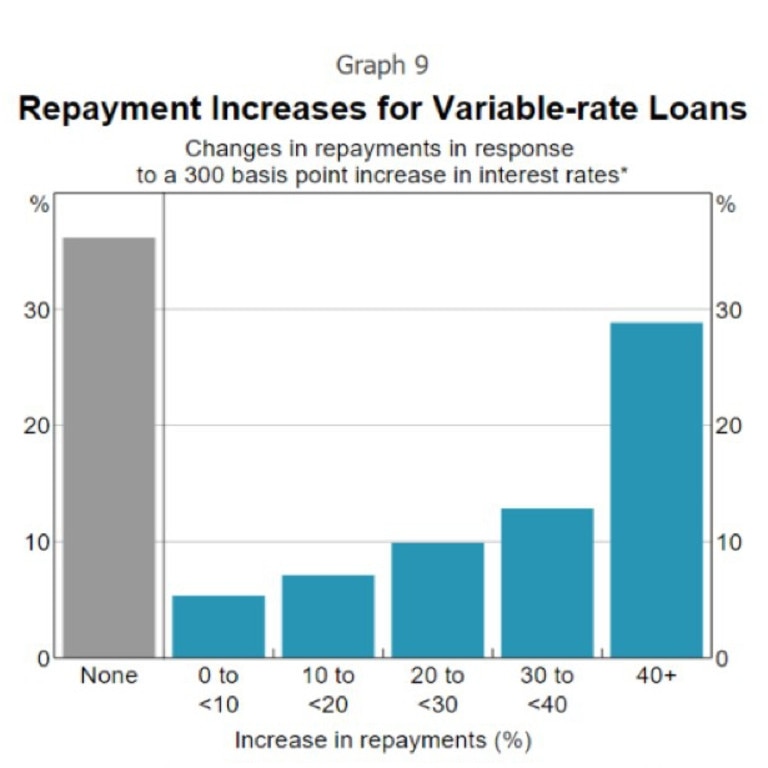 This shows changes between new required repayments and average monthly payments over the past year – almost 30 per cent of variable rate loans face a 40 per cent increase in payments. Sources: RBA; Securitisation System 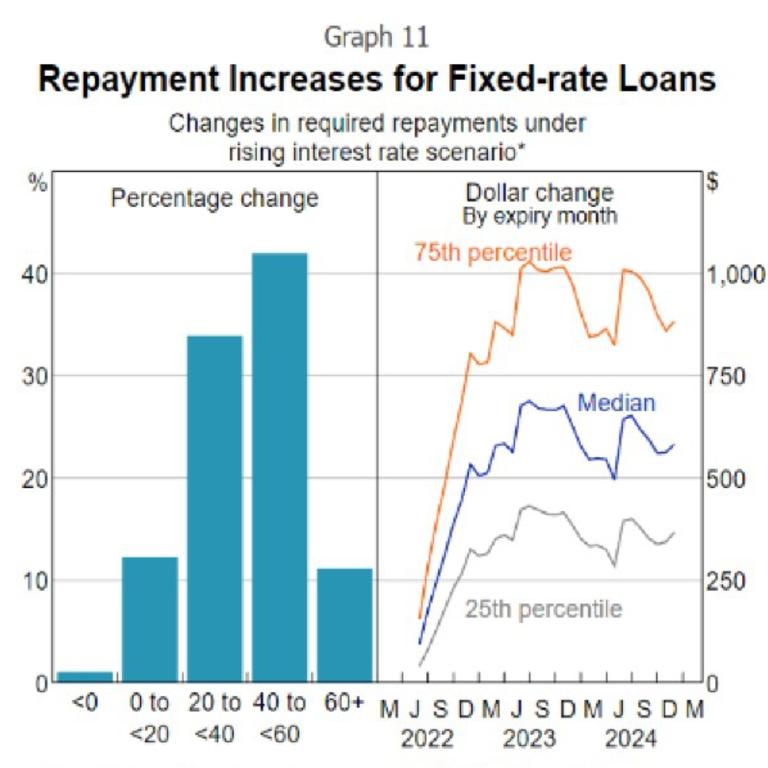 Considering how long it historically takes for inflation of around 7 per cent to be brought down to the RBA’s 2 to 3 per cent target, it’s very much a good news, bad news scenario, at least for mortgage holders.

The good news is the labour market is strong and even though there is a storm brewing on the global economic horizon, on paper Australia’s job’s landscape is better equipped than it has been in almost 50 years to deal with whatever challenge comes our way.

The bad news is the longer the labour market stays strong, the higher rates may go as the RBA redoubles its attempts to drive down aggregate demand in its fight against high inflation.

Then there is the issue of falling housing prices. According to an analysis by fund management firm Coolabah Capital, housing prices could fall by up to 31 per cent if the RBA cash rate peaks at 4.25 per cent. In this scenario, the cash rate rises to 4.25 per cent over 2023, followed by rate cuts the two following years, back to 3.75 per cent by the end of 2025.

For now though, the RBA will continue to chase high inflation like Wile E. Coyote chased the Road Runner. It may take quite a while for it to finally catch up, but with the labour market so strong, it has plenty of ammunition to pursue it as aggressively as it pleases.

Tarric Brooker is a freelance journalist and social commentator