Qantas CEO Alan Joyce’s six-bedroom waterfront mansion with its own private jetty, harbour pool and picturesque views of the Sydney skyline has been targeted by vandals amid anger from ex-employees and passengers.

The luxurious Mosman mansion – bought for a staggering $19 million by Joyce and his partner Shane Lloyd earlier this year – is nestled in one of the most exclusive streets in the affluent area of the Lower North Shore.

But neighbours spotted the three-storey residence of the couple had been hit by several eggs, rolls of toilet paper and an unknown substance, likely fruit or meat.

Photos from outside the 15-room property on Tuesday showed the remnants of eggs splattered across various areas of the roof while long lengths of toilet paper draped from the front to the back of the house.

The garage was not spared either with three dark red splats on one of the doors.

NSW Police confirmed to SkyNews.com.au local officers had not received any reports of malicious damage but urged residents to report incidents or crime. 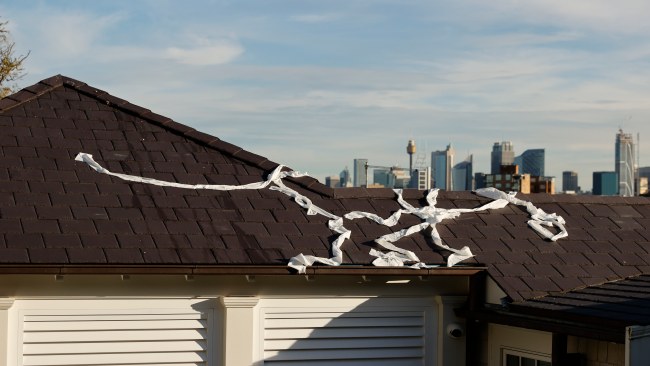 Eggs could also be seen splattered across the roof of the multi-million dollar home. Picture: Tim Hunter NSW Police confirmed to SkyNews.com.au there has been no report of malicious damage from the area. Picture: Tim Hunter

Neighbours told The Daily Telegraph they have not seen Mr Joyce or his husband at the home since the purchase was made in May.

“We haven’t seen him … we heard they were going to spend $3 million changing the colours of god knows what,” one local said.

Another resident backed the claims there has been no movement at the home.

“There has been nobody at the house. Put it this way, I haven’t seen any cars there,” they added.

Other Mosman locals were adamant people living in the affluent area would not be so brazen to vandalise a property with fingers pointed elsewhere.